The 21st century has been strange for gamers so far. We were there, minding our own business, when the internet started reporting about a new threat emanating from our favorite hobby – and it seemed to come out of nowhere. It’s kind of a nightmare scenario that unfolded when we started learning that the hobby that keeps us sane is also ruining our eyesight. To counter the alleged harmful effects of a mysterious and potentially dangerous blue light, special glasses have appeared on the market. Brands like Gamer Advantage have burst onto the scene, bringing with them a product intended to cure our latest gaming woe. 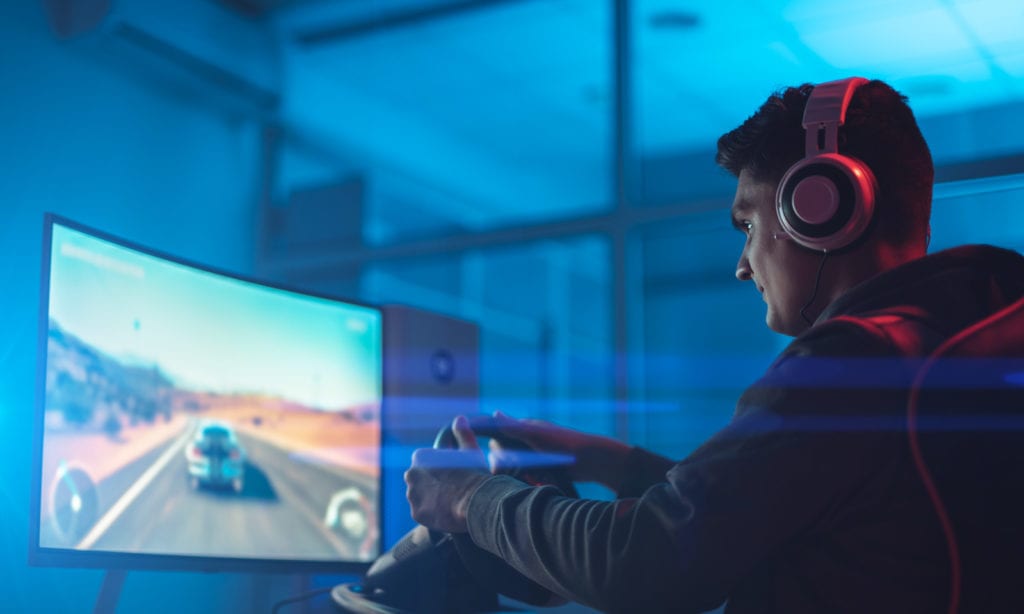 But have we ever wondered if the threat is really there? It all happened so fast – from when reports started touting the dangers of digital devices and blue light, to the rapid growth in popularity of “blue light” glasses – that there haven’t had enough time to actually verify this claim. That’s why we’re here, huddled around our devices, soaking up those supposedly harmful rays. To make sense of things, because, according to several credible sources, this is a completely disproportionate phenomenon.

However, before knowing the truth about these fears, it may be useful to know what blue light is. In short, blue light has the shortest wavelength of all the colors in the rainbow. This equates to a greater amount of energy emitted. What we are led to believe is that blue light photons damage the retina, which makes sense if you think about it. Higher energy light should cause more damage to the membrane at the back of the eye. But there’s something else at work here, and to understand just how dangerous blue light is, just step back in time to March 2022.

The real culprit is exposed

In March 2022, medical writer Celia Vimont wrote “Should You Be Worried About Blue Light?” for the American Academy of Ophthalmology, which addressed the dilemma posed in the title. Although not a physician herself, Ms. Vimont enlisted the expertise of surgeon Rahul Khurana, MD, a Stanford graduate and specialist in vitreoretinal (or vision restoration/preservation) surgery, to examine the realities of blue light and its apparent effects on our eyes. Vimont notes upfront that “there is no scientific evidence that blue light from digital devices causes damage to your eye.”

So why do our eyes hurt when we stare at a screen for too long? According to Dr. Khurana, who works at one of California’s largest retina practices, it’s because we blink less. As a result, our eyes dry out, leading to the irritation and fatigue we attribute to blue light.

If you think back to what happened a few moments ago, we agreed that higher energy light will definitely be more damaging to your eyes. There’s no denying that our digital devices emit blue light, so how come they’re not much more harmful? As head and neck surgeon Dr. Salvatore Iaquinta noted in his article “Is blue light from digital devices dangerous?”, a device such as an iPhone emits only 1/10th the amount of blue light produced by natural sunlight. And that’s only at maximum brightness, which probably isn’t the case 24/7 for most modern phone users.

While the blue light emitted by your devices may not be a contributing factor to your eyestrain, it is known to exacerbate other issues. For example, using a device that emits blue light too close to bedtime can make it difficult to fall asleep. Assistant professor of optometry at Ohio State University Phillip Yuhas says playing games or surfing the web on your phone just before falling asleep can cloud concentration and make the brain foggy the next day.

But are blue light filters worth it?

As much as glasses designed to block blue light look cool, they aren’t really as practical as they are advertised. Although the Vision Council published a report on digital eye strain in 2016 suggesting that exposure to blue light was harmful to the human eye, enough educated voices in the field of optometry vehemently say otherwise. University of Alabama Birmingham School of Optometry Clinical Associate Professor Adam Gordon, OD, says overexposure to blue light can make it difficult for the eye to focus in the short term, but that it poses no long-term danger.

In fact, it was Gordon who criticized lens makers, saying they “have jumped on the harmful blue light bandwagon and are creating products they claim will protect your eyes from macular degeneration or other eye diseases”. As he reinforces, “blue light more often causes eye discomfort and annoyance than physical damage.”

Even the American Academy of Ophthalmology has come out against blue light lenses. According to the academy, there is a “notable lack of scientific evidence that blue light is harmful to the eyes.”

What does this mean for gamers?

Honestly, it doesn’t sound like much, except you don’t have to worry about your eyes falling out of your head just from exposing yourself to blue light for hours a day. Just take care of your eyes. Take breaks, use lubricating drops if they’re dry, don’t play until bedtime, and don’t forget to blink.

If you are more comfortable with a pair of blue light lenses, no adverse side effects have been reported. Just be aware that you may be paying a hefty sum for a placebo to a non-existent problem.